First on the list of activities planned for the launching was the Campus Tour that features the various technologies and products developed by the university. Leading the tour were the University President Dr. Edgar A. Orden and Program Leader Dr. Gella Patria L. Abella along with selected CLSU Officials and Project Team. The tour started at RM-CARES for the organic-based onion production to SRC for goat production, CLSU PCC for different dairy products, AFTBI for Vera Bella breads, CTRMD for mushroom production, PreDic for vertical farming, and FAC for aquashade. 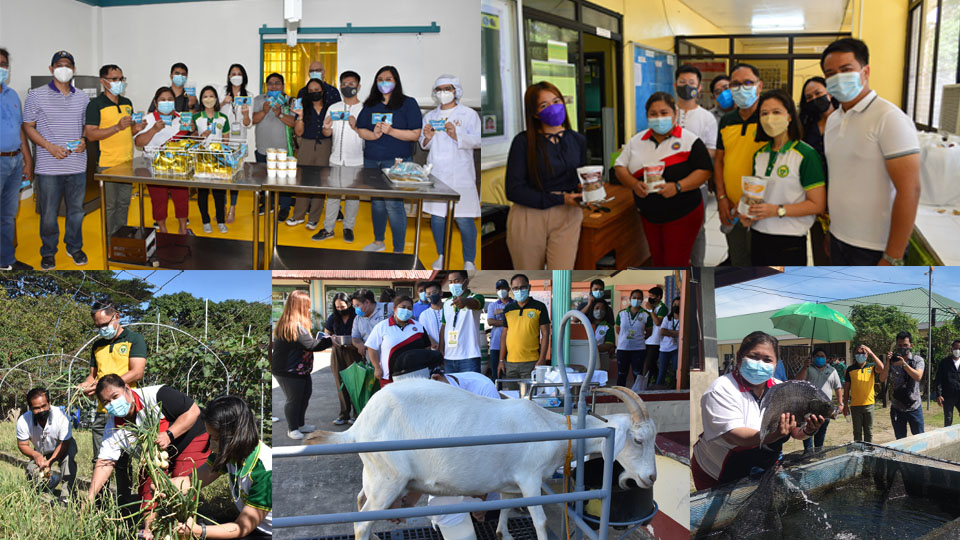 In the afternoon, the Opening Program was held at FPJ Communication Hall, CLSU. Dr. Orden stated at his welcome remarks, “the making of the eFARM Academy is grounded with the clear intention of not only putting food on the table but rather it gives emphasis and focus on the immediate need of educating the world on matters that concerns food security”.

On the other hand, Atty. Milla congratulated the team who despite the long years of waiting and the challenges posed by the pandemic, was still able to pursue and launch the project. She added that the proposition for this edu-tourism project was based on the study by the UNESCO Institute that there will be a global demand for higher education wherein by 2030, there will be an increase of nearly 120 million students in higher education, as explanation to how this initiative started.

Further, Chairman Popoy centered his inspirational message that edu-tourism is really to identify the core competencies of universities and harness it for tourism purposes instead of the usual thinking that tourism is only about the beaches or the famous restaurants of the area. With this, he encouraged and challenged the State Universities and Colleges (SUCs) to reimagine themselves from a tourism perspective and maximize their resources to help make the Philippines a must see, a must read, and a must study place.

In her closing remarks, Dr. Abella said that the launching hopes to extend to greater stakeholders, local and abroad, an attempt to educate the world on food security as the program’s banner mission for humanity. It hopes to attract global life-long learners who will soon be adopters of these technologies.

The activity was also attended by Atty. Jose Maria Ceasar C. San Pedro (Provincial Tourism Officer), Mr. Edilberto D. Larin Jr. (Director of Center for Bulacan Studies, BulSU), and Dr. Felipa Rico (Director of International Linkages, PRMSU) together with her STETC-Z team. Several CLSU officials such as the College Deans, faculty and staff were also in attendance in support of the program. 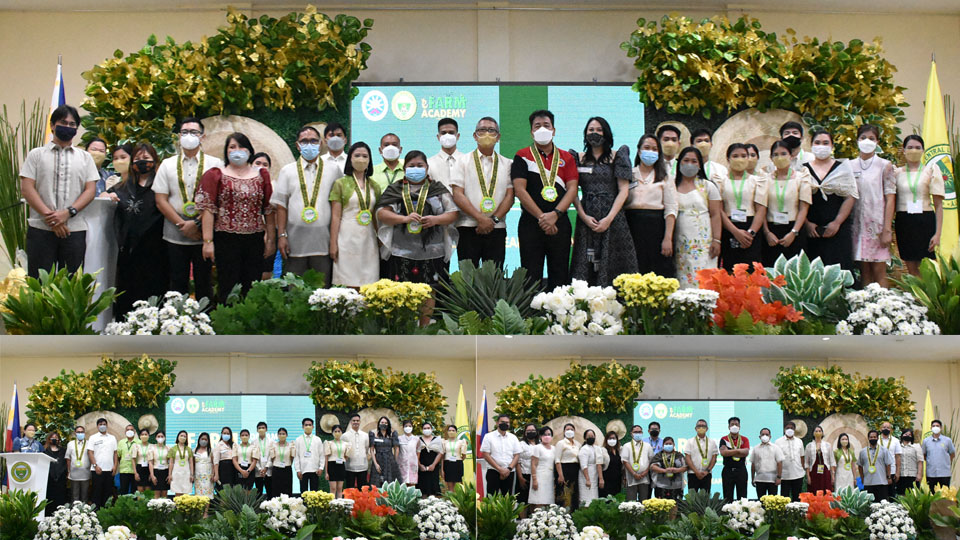 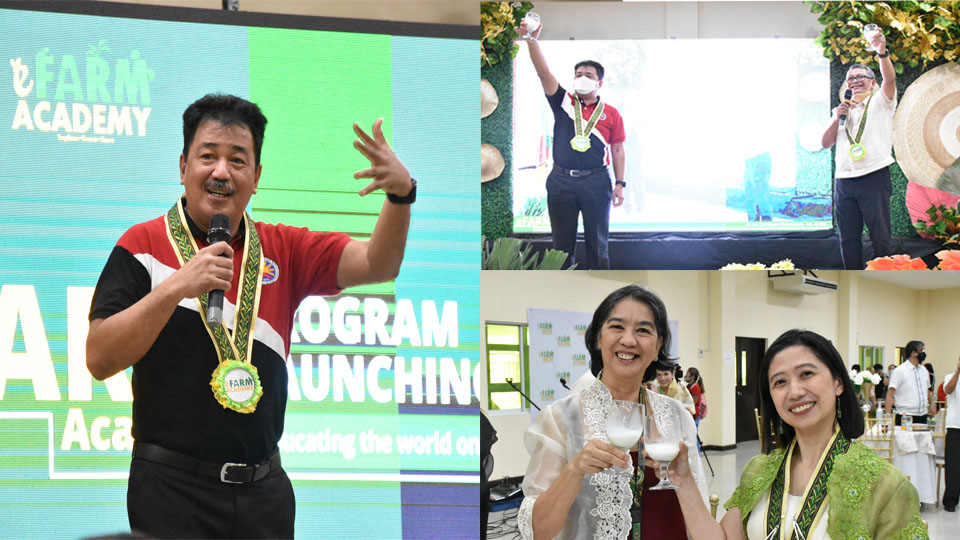 Dr. Abella explained that having the main tagline of “Explore. Learn. Earn.”, the project focuses on providing not only virtual learning materials but also experiential learning activities to its interested learners to fully discern their chosen course, and be able to transform these into a subsistence. As the project targets to benefit farmers, fishermen, housewives, entrepreneurs, and LGUs to further their education in food and agriculture, courses were set to be offered for free, at least for its first implementation year.

Moreover, Dr. Renato G. Reyes, VP for Academic Affairs and one of the Project’s Staff, expressed that in due course where a minimum tuition fee will be charged to access the courses, disadvantaged local farmers will be covered through CLSU partnering with LGUs and NGOs to support their scholarship.

“This eFARM Academy is intended for life-long learners, dito sa atin at sa labas ng Pilipinas. Ang idea kasi talaga natin is to empower people by giving them the technology that they need. So partnership is very important,” he added.

Starting off with the Kapihan sa Bukid held at Brgy. Cabisuculan, Science City of Muñoz addressing the need to make the community and farmers understand what the project has to offer, the activity also seeks to intensify the partnership between CLSU, Science City of Muñoz LGU, and the Cabisuculan Mushroom Growers Association as one of the beneficiaries of the eFARM GROW. 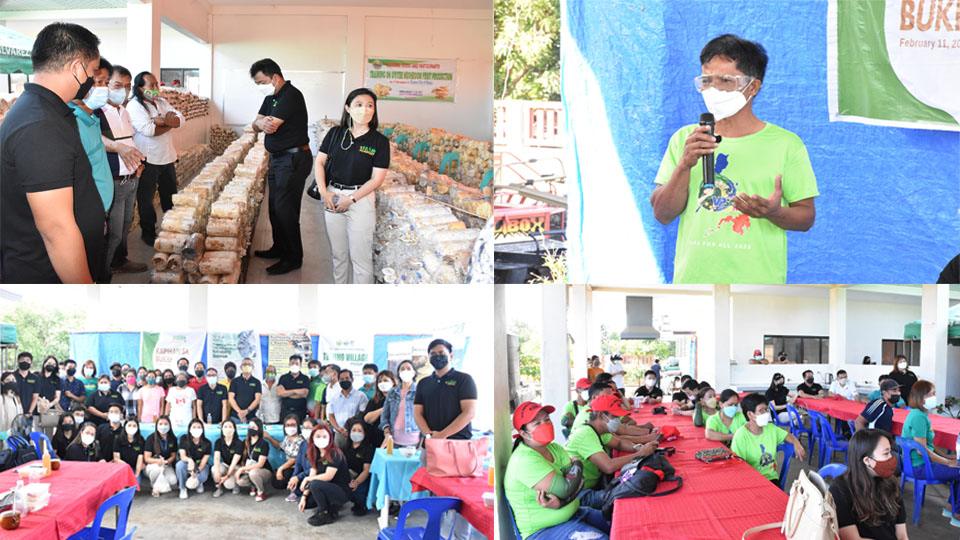 Further, the day concluded with the TEStimonials: Meet and Greet activity held at Camp Paraiso Hotel and Resort, Brgy. Labi, Bongabon, Nueva Ecija. This aims to celebrate the success stories of TES (Tertiary Education Subsidy) grantees who started from worrying how to support their education to being able to graduate and continue fighting for their dreams.

Ms. Robylene Jorduela and Mr. John Ibale personally shared their stories and expressed their gratitude towards the commission as it was able to change their lives for the better. Meanwhile, a video recording was also presented starring Ms. Hydee Avellanoza, Mr. Marvin Martinez, Mr. Ramil Aquino, and Mr. Charlie Bagalanon.

In response, Chairman Popoy stated that TES grantees should not thank the officials, but rather CHED should thank the grantees for giving actual proof that the government's activities and initiatives are working for the betterment of its people. 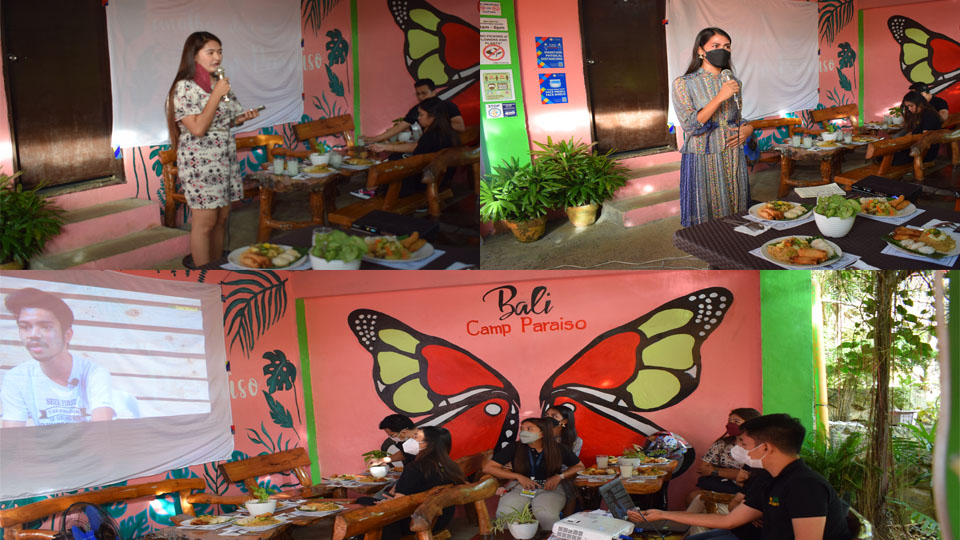